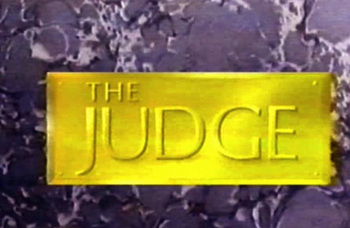 The Judge was a syndicated daily courtroom show that ran from the mid-1980s to early-1990s, and was part of the 1980s wave of courtroom shows. Unlike the current wave of shows that typically deal with real-life small-claims arbitration, these dramas featured fictional stories, but were said to be based on real-life cases and current issues of the day. Often, the show aired alongside fellow courtroom dramas Divorce Court (with real-life Judge William Keene) and Superior Court (with a rotating series of judges).
Advertisement:

Robert Shield played the protagonist judge, Robert Franklin, who was assigned to a courtroom in an unnamed city (presumably metro-sized) in an unnamed state. Most of the cases were family court-style, but others were arbitrations or criminal proceedings.

The show was produced and licensed by WBNS (Columbus, Ohio), and was distributed by Genesis Entertainment.