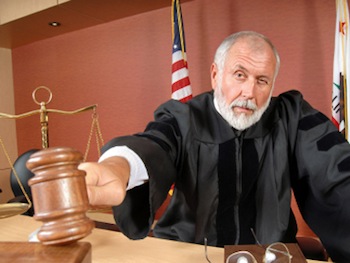 Sooner or later, everyone winds up in front of The Judge.

If the part of a judge is a small role, it is generally filled by stern black women (with hair pulled tightly back) or gruff older white men. Sometimes these archetypes mix, leading to the stern, slightly below middle age black male or white female judge.

If there's a tribunal or other situation with more than one judge, both the stern black woman and the gruff older white man will usually appear, though a Bald, Black Leader Guy is a distinct possibility. For example, Charlton Heston played the gruff older white man in one of the last episodes of the The Outer Limits (1995), and there was also a stern black woman present.

It's been said that the above-average presence of black judges in popular media, particular American television is a sort of Political Correctness Gone Mad designed to show African-Americans in positions of authority. This is often a convenient Writer Cop Out in shows that otherwise feature very few black characters of any importance.

Supertrope to the Judge, Jury, and Executioner, who combines cop, judge and executioner all in one; Hanging Judge, who always pursues conviction, almost always of the capital kind; and Circuit Judge, who moves within their jurisdiction rather than operate from a courtroom.