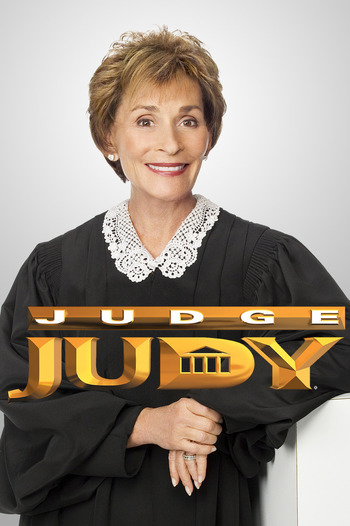 The mediator persona is real, and her name is Judith Sheindlin.

As an experienced family and criminal court judge, the titular Judge Judy conducted her courtroom for a quarter-century with a sharp wit and a sharper tongue, evaluating legal disagreements between some of the worst human garbage imaginable who couldn't land a spot on Jerry Springer. The standard episode sees Sheindlin hearing the testimony of both parties, peppered with her own biting comments as needed, determining which has the better case and why, and then issuing a ruling. After the case, the litigants have a chance to speak to the camera and comment on how justice was or was not served.

Note that the legal disputes on the show were indeed real cases — similar legal disputes could be found in a typical small claims court. But Sheindlin was not acting as a judge for these cases (though she was a real judge for many years, having passed the New York State bar exam in 1965 and serving for many years in family courts). The show was filmed on a set in Los Angeles, not in a courtroom. The guy in front of her was a former New York City Court Bailiff

, not a police officer. And the "public gallery" was filled by paid extras. What was actually going on was Sheindlin acting in a legal role as an arbiter, a neutral third-party in a small claims legal dispute. Before the case made it to the show, it was agreed by both parties in the dispute that they would accept Sheindlin's decision as to what would happen going forward. Also, the settlement was paid by the show itself, though Sheindlin had the power to determine how much of the remainder (if any) goes to the litigants themselves. While this may sound like cheap justice, several litigants have found that an appearance on Judge Judy is enough to ruin their reputations forever once word gets out about them.

Spawned a whole bunch of judge shows; however, it was not the originator of the judge show — that honor belongs to The People's Court, which premiered fifteen years before the show in 1981 (and starred Sheindlin's husband Jerry from 1999-2001; former NYC mayor Ed Koch, who appointed Sheindlin as a criminal court judge in 1982, also presided over The People's Court from 1997-1999).

In 2014, Sheindlin, through her company Queen Bee Productions, created another court show called Hot Bench, which is similar to Judge Judy but uses a three-judge panel hand-picked by Sheindlin herself, similar to and inspired by the court system in Ireland. Sheindlin was not one of the judges, although she appeared on a few episodes as a guest judge (as did her husband). Interestingly, Hot Bench was the original working title of Sheindlin's own show, as she initially didn't like the title Judge Judy.

Judge Judy came to an end in 2021 after the end of its 25th season, although CBS is continuing to syndicate reruns and Hot Bench is continuing with new episodes. The end came amid legal wrangling between Sheindlin and CBS over profits from the sale of her show's catalog to CBS. Sheindlin has moved on to a new show called Judy Justice, which premiered on November 1, 2021 on Amazon's IMDb TV (now Freevee) streaming service. The new show follows a format similar to Judge Judy with a number of tweaks, including the addition of a law clerk (Sheindlin's own granddaughter, Sarah) and a stenographer, and the replacement of Byrd with a new bailiff, Kevin Rasco, who had been head of security on Judge Judy. Byrd will return as bailiff on Tribunal, an upcoming Freevee series announced in April 2022, which will be a semi-remake of Hot Bench featuring two of that series' former judges as well as Judge Judy's son Adam Levy.

All rise for the honorable Judge Judy and examples of the following!: