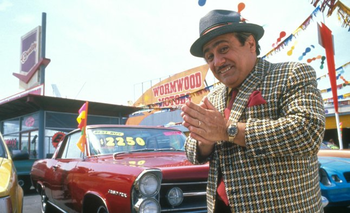 "It used to belong to a little old lady who only drove it on Sundays."
"He's out to sell some used cars,
and it doesn't matter who you think you are
He's got a line for everyone,
He'll treat you like his daughter or son
But wait, don't go for that bait—
Too late!"
— The W's, "Used Car Salesman"
Advertisement:

You're in a sticky situation; you need to get something and there doesn't seem to be a cheap or legal way of getting it. (It could be banned, rationed, expensive, from overseas or possibly just made in extremely limited quantities). If you're unlucky, you'll have to visit Honest John's Dealership.

These are the guys who'll attempt to sell you anything, mostly items that Fell Off the Back of a Truck. The prices are usually dodgy too, either Too Good to Be True or obnoxiously overpriced. (The former usually catches more people out than the latter.) All in all, their main goal is money.

Like its cousin trope, the Friend in the Black Market, Honest John can fit anywhere on the neutral or chaotic side of the Character Alignment spectrum: a good comparison would be the Loveable Rogue Jerk with a Heart of Gold 'Del Boy' Trotter or Mr. CMOT Dibbler types VS Jerkasses like Mr. Wormwood or Sociopaths like Harry Lime. After all, selling malfunctioning blow-up dolls is a far more forgivable occupation than selling The Alleged Car that hates you with a passion or fake pharmaceuticals to orphanages. If the "Honest John" character is genuine, pure evil, then you've got a Deal with the Devil on your hands.

Expect him to wear an obnoxious outfit (plaid polyester suit jackets seem to be popular), record Insane Proprietor advertisements and Kitschy Local Commercials, and say "But Wait, There's More!" every other sentence. If this character is rendered as a Funny Animal, chances are quite high that he'll be a weasel or a fox. Items for sale at Honest John's may include All-Natural Snake Oil, Asbestos-Free Cereal, the Brooklyn Bridge, and of course The Alleged Car. If he's primarily out to scam women out of their money rather than everyone, then he's a Sexist Used Car Salesman.

Despite trying to appear as having Names to Trust Immediately, chances are fairly good that the "Honest" part makes it an Ironic Name. You know, if he has to tell everyone he's honest...

Compare and Contrast Friend in the Black Market, who also sells items at a premium but at least guarantees he's giving you the good stuff. In a military setting, this trope is almost guaranteed to overlap with The Scrounger.

See also Snake Oil Salesman, Shady Real Estate Agent, New Job as the Plot Demands, Crooked Contractor, Medicine Show, The Barnum, and Traveling Salesman. Only tangentially related to Richard Nixon, the Used Car Salesman, as that doesn't actually require characters to have this job, just a different one than in real life.

Completely straight examples tend not to last long in Real Life, but we've probably all met one at least once. They're called "gray market salesmen" in business/econ terms. Ironically enough, they have less of a reason to lie and cheat than new car salesmen, as used car sales are a) more profitable in general and b) usually grant more consistent commissions because you're largely just selling the car and have fewer middle-men to appease, while new car salesmen derive a far larger portion of their commissions from tacked-on extras, leading to overwhelmingly high-pressure tactics and occasionally outright lying or grossly stretching the truth.