''Travellers from the Planet Earth..." 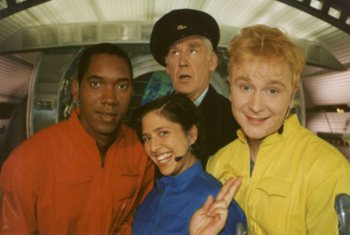 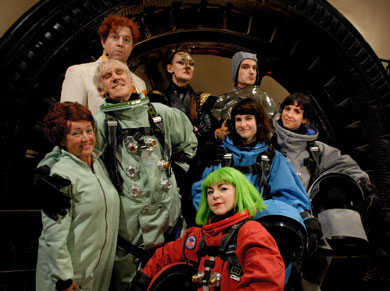 Left to right, starting at the back — The Count, the Professor, Lennartsson, Peo, Billie, Mira, Ulla and Pax.
Advertisement:

Vintergatan (The Milky Way) is a term used commonly when talking about the Vintergatan-universe in general - a number of series produced by Sweden's SVT.

The Vintergatan series was originally a show created for the mornings of summer vacation, airing at nine-o'-clock every morning for around sixty days in the year 2000. It began with Vintergatan 5A — a children's science-fiction comedy show that was about three youngsters and one oldster — Plucky Girl Mira, The Smart Guy Henrik, the black-and-American Glen, and a very Grumpy Old Man by name of Peo. To summarize, they thought they were going to camp, all of them riding in the same cab (with Peo as the driver). They suffered an unfortunate Alien Abduction. They found themselves on a spaceship — but before long, it went dark, and a holographic screen appeared. An alien (who, quite simply, called himself 'Alien') began speaking to them, asking them if they would go on a quest that would change the world forever...and, in an actual aversion of a But Thou Must! situation, gave them the choice to deny. Mira cast the deciding vote, and leaned toward refusing...but after Glen sighed, saying he should have known she would back down — after all, she is a girl — she agreed anyway, and the adventure began.

Despite some very annoying Filler, not-too-convincing special effects, and a rather Anvilicious Aesop, Narm Charm was in its favor (and plain old regular charm) — and so, it proved popular enough to get a second season (Although one could also call it a sequel), which aired the next year. Vintergatan 5B did not have Mira as a leading member of the cast anymore, replaced by Emotionless Girl Irina Teresjkova, and the quest was different as well — Ulla, Peo's wife, had mysteriously gone missing, and he desperately contacted his fellow travellers to help him search for her. Interest was kept strong, and another show was made...

...Tillbaka Till Vintergatan (Back To The Milky Way). It was mostly compiled of material from 5A and 5B, though featured some newly recorded material as well, airing during the year 2003 and 2004 in the evenings. The plot was simple — Peo was working at his gas station (in space!), and telling the tales of his past to his assistant Garsson, making it an example of an entire whole flashback series. Nevertheless, it cut away some of the filler. Which was good.

In the year of 2009, another sequel was made, taking place nearly twenty years after the original — Vid Vintergatans Slut (don't laugh — it means At The End Of The Milky Way). It features Mira, all grown up, and not at all like her younger, more adventurous self — these times, she's a surly, middle-aged woman. She also has a daughter named Billie, who fondly remembers the stories her mother used to tell her when she was small, about space and travels and aliens, which she always assumed was just stories. When she visits her childhood home, however, she finds a spacesuit hidden away, and a rather human-looking alien named Pax (from the planet Ypsagon) visits her and takes her to her spaceship, claiming she's sent from Peo and mistaking her for Mira. They pick up a reluctant Mira after this, and they finally get to have all the adventures in space Billie always wanted but Mira turned her back to, as they set off to defeat a Terrible Trio (consisting of The Count, The Professor, and Lennartsson). It kept continuity in mind, and it was written and directed by the same fellow who did the original 5A and 5B. It ended on a Sequel Hook, so it looks this isn't the end of the Milky Way.

Nevertheless, the series was appreciated by children abound. A shame about the lack of DVD release for the original series, though.

These shows contain examples of: