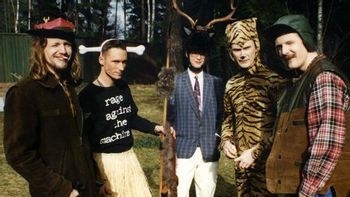 Varan-TV was a television show by Swedish comedy troupe Varanteatern which ran between 1997 and 1998. note "Varan" is the Swedish word for "Monitor Lizard".

The humor in Varan-TV more or less defies description, but it's very much a product of its time, poking fun at all sorts of contemporary cultural, political and media-related goings-on. Had quite a big verse of characters who have shown up in other projects by Varanteatern.

INSANELY quotable. Picking a page quote was not easy, trust me on that one.

Essentially a sketch comedy show, some of the most popular segments on Varan-TV included:

In september of 2020, the group announced a reunion, and created a Kickstarter for a new series of sketches. The Kickstarter hit its first goal of 300000 SEK in less than two hours. The Kickstarter eventually gathered pledges of over 4 million SEK, and a third series of Varan-TV is, in October of 2020, in early stages of production, and will be released to backers in a format as yet undecided.