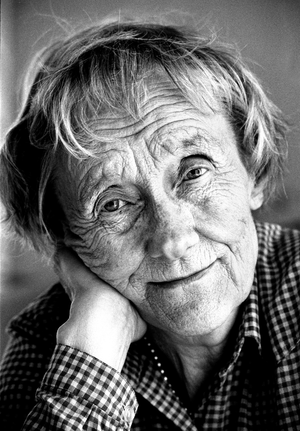 "There is very little you can beat into a child, but no limit to what you can hug out of it."
—Astrid Lindgren
Advertisement:

Astrid Anna Emilia Lindgren (born Astrid Anna Emilia Ericsson, 14 November 1907 – 28 January 2002) was a Swedish author of children's books. Her books have been translated into 85 languages, published in more than a hundred countries and sold more than 145 million copies. She has written dozens of books; some of the most famous ones are Pippi Longstocking, Mio, My Mio, Karlsson on the Roof and The Six Bullerby Children (also known as The Children of the Noisy Village). They verge from the relatively mundane (The Six Bullerby Children) to children's detective stories (the Bill Bergson series) to straight-out fantasy (Ronja the Robber's Daughter, The Brothers Lionheart).

A good chunk of her books have been turned into films or TV series (most of the movies are edited from TV footage, though). After the failure of the 1949 film adaptation of Pippi Longstocking left Lindgren dissatisfied due to it altering several elements of her books, combined with the casting of Viveca Serlachius—who was 26 years old at the time—to play the title character, Lindgren decided to personally write the scripts for any further Live Action Adaptations of her works, with few exceptions, and to become more involved in the creative process.

In addition to adapting her works, Lindgren wrote original screenplays and was also a lyricist. She made her screenwriting debut with Rasmus and the Vagabond, which was released in 1955.

She has an asteroid named for her; on learning this, she commented that henceforth they could call her "Asteroid Lindgren". She also narrated readings of many of her books for Swedish television and radio. And after 2016, she became the face of the Swedish 20-crown bill. note They deliberately put her on the smallest bill since that was the one children were most likely to use (the only one more likely was the coins, and only the King is allowed on those).

She was Sweden's very own Dear Grandmother.

Works of hers on the wiki: