Literature / Karlsson on the Roof 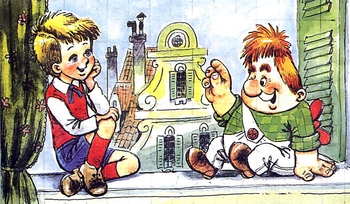 Karlsson on the Roof is a trilogy of children's books written by Swedish author Astrid Lindgren. (Karlsson-on-the-roof, Karlsson Flies Again and Karlsson-on-the-Roof is Sneaking Around Again), in which the main character is "Lillebror" (literally Little Brother, named "Eric" in the English translation), the youngest of three children in an ordinary family who live in an apartment in Stockholm. His family is repeatedly described as completely ordinary, with a mum and a dad and three siblings. Big sister Bettan ("Betty" in the English translation) is boy-crazy, big brother Bosse ("Bobby" in the English translation) plays guitar and does poorly in school, and Lillebror, who is several years younger than his siblings spends a lot of time alone... at least until the day he makes an extremely extraordinary friend, namely the titular Karlsson-on-the-Roof.

Karlsson is a small, fat and highly overconfident "man in his prime" who lives a small cottage on the rooftop of the apartment building. He comes and goes as he pleases, thanks to a propeller on his back, operated by a button on his stomach, that gives him the ability to fly, and is often more than happy to show up when Lillebror feels lonely and needs a friend — though he's by no means always an easy friend to have, with his often selfish and self-centered attitude and tendency to cause trouble and then fly off to let others take the blame. Still, he does have a lot of charm and inserts a lot of fun and excitement into Lillebror's somewhat monotone life, even if Lillebror's family for the most of the first book think that Karlsson is just an imaginary friend that Lillebror invented as a convenient scapegoat.

Lillebror and Karlsson have to deal with more than disbelieving parents, though; over the course of the books they have to tangle with a strict and hysterical housekeeper named Miss Bock, Lillebror's old cranky uncle Julius, two burglars named Fille and Rulle ("Cosh" and "Ruffy" in English), who go on to become recurring antagonists, and even the risk of discovery and exposure to the general public when newspapers begin printing pictures of a flying Karlsson and speculate whether he's a UFO or some secret foreign spy satellite.

The Karlsson stories have been adapted for both the big and the small screen a number of times. The earliest adaptations are the two Russian featurettes from 1968 and 1970, which were based on the first two books in the series and are part of the reason why Karlsson is such a popular character in Russia that he's almost a Russian cultural icon. These were followed in 1974 by a Swedish live-action version called Världens Bästa Karlsson ("The Greatest Karlsson in the World"), which adapted the first book. Then, in 2002, another animated movie was released, this time a full-length theatrical feature based on the first and third book (primarily the third), produced in Norway and overseen by Ilon Wikland, the woman who had illustrated the original books.This movie also spawned an animated TV series.

The Karlsson on the Roof series provides examples of: