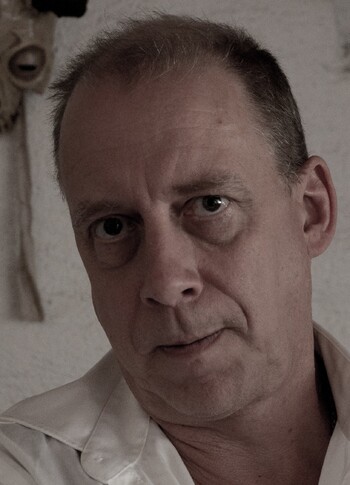 In the 80's he worked with Äventyrspel, traveling Sweden to demonstrate Drakar & Demoner as well as wrote Spindelkonungens pyramid, the first RPG in Swedish. In the 90's he left the game industry to become an officer in the Swedish army.

His first published work was the 2009 short story collection Swedish Cults (Svenska kulter) which received rave reviews. He also returned to RPGs and has co-written Swedish releases of Call of Cthulhu, Tales from the Loop and Chock, a Swedish spin-off from Tabletop Game/Chill. Between 2012 and 2019 re released a trilogy of horror novels eventually called The Case Cornelia Karlsson about a disturbed woman promising her soul to Nyarlathotep.

His table of works is somewhat muddied. Foreign releases of his short stories has often created their own collections, unlike the Swedish releases. His short stories were originally released as Svenska kulter (Swedish Cults), Interspecies Liaisons (Artöverskridande förbindelser) and You can not live (Du kan inte leva) and later collected as Collected Swedish Cults (Samlade Svenska Kulter).