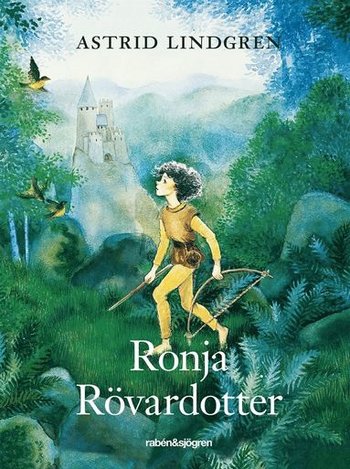 A Swedish novel about a robber's daughter, originally written by Astrid Lindgren in 1981.

Ronja is the daughter of Mattis, the chief of a group of bandits living in a fort hidden in the woods. One day she journeys out on her own and meets Birk, the son of Borka, the chief of a rival bandit clan. While competing over who can leap over a chasm the best, Birk is rescued by Ronja from falling to his death, and they secretly become friends.

The extremely faithful movie version, directed by Tage Danielsson, was made in 1984 and became the highest-grossing film in Sweden that year, that was later expanded to a four-part TV Mini Series. There is also a musical (by Axel Bergstedt) and a stage adaptation (by Barbara Hass), both of them German. A Japanese animated TV series co-produced by Studio Ghibli and animated by Polygon Pictures started airing in October 2014.