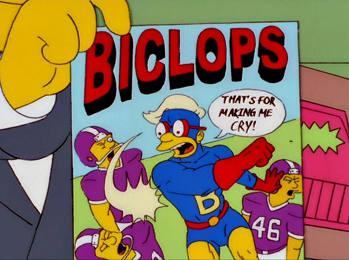 '"Every engineer dreams about saving the universe and having sex with aliens. This is much more glamorous than the real life of an engineer, which consists of hiding from the universe and having sex without the participation of other life forms. Consequently, ratings for Star Trek will remain high as long as they stay away from any realism."
— The Dilbert Principle
Advertisement:

So you just started watching this movie with a main character who's powerful, incredibly talented, irresistibly good-looking, long-lost royalty, and an Ideal Hero to boot. Sounds like your garden-variety Mary Sue, right?

Except that you don't mind at all. Instead, you're seeing yourself in their shoes and enjoying it. After all, everyone likes to fantasize about being awesome once in a while. You can argue over whether or not they're too self-centered, but they're definitely an Escapist Character.

Some members of the audience may identify with a character and others may not identify with the same character. Whilst many audience member's Wish-Fulfillment fantasies have common elements, they are not all identical. Thus, the distinction between this and a standard self-insert is very much a subjective matter.

Compare/Contrast the Expectation Lowerer, a character that allows you to feel awesome by being much worse than you are; and This Loser Is You; a character who the creator feels is a representative of the audience. This trope has nothing to do with the Escapist film or website.