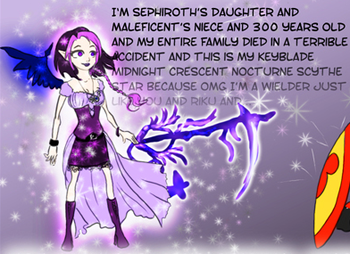 "Im good at too many things! WHY CAN'T I JUST BE NORMAL? IT'S A FUCKING CURSE!"
— Ebony Dark'ness Dementia Raven Way, My Immortal
Advertisement:

While Mary Sue is too nebulous to be judged by any hard and fast standard, certain traits have become surprisingly popular in defining what "makes" a Sue. In an effort to make their characters more attractive without having to do the leg work of natural character development, the authors just add some of these superficial traits to their character. Below are the ones that the collective unconscious (so to speak) find especially attractive and end up incorporating into their characters with regularity.

With the way the term "Mary Sue" has mutated over time, a great many people just end up labeling any character overdosed with these traits as a Mary Sue regardless of her importance within the story (or because they just don't like the character). That's not necessarily true. Even if a character has quite a number of the traits described below, Mary-Sueness can still be averted by a good enough explanation for why they're there. Some female characters may seem over-powered and a bit "too good to be true" on paper, but when placed in context they can be well-developed, three-dimensional characters. It's when a trait exists more to make somebody stand out than to develop them as a character that it starts going into Mary Sue territory (unless it's for comedic effect). Alternatively, you may feel as if the writer is frantically trying to justify a trait to themselves and the reader.

Contrariwise, a lack of these traits does not automatically mean the character isn't a Sue: see Anti-Sue and Suetiful All Along. And with the many somewhat arbitrarily formed "is your character a Mary Sue?" questionnaires floating around, it's all too easy for a character who's well-developed and interesting to be slapped with the label simply because her blonde hair and blue eyes added one point too many.

This article will concern itself with gender-neutral and female traits. For (the few) male-exclusive variants, see Marty Stu. For a litmus test that draws on much of the same source material, see here

. For a useful and reasonable definition and tutorial on how not to make a Mary Sue, see here

open/close all folders
Advertisement:
Personality
Skills
Physical Appearance
Accessories
Canon Character Relationships
Story Elements
Names
A Mary Sue almost always has an unusual and Overly Long Name, often with four or more parts. It's the first and most obvious sign to the reader that this character is special in some way, especially if it stands out among canon names. That said, there are many ways for a Sue's name to accomplish this:
Presentation
Author Investment in the Character
One of the biggest signs of a Mary Sue is the author having a particularly strong interest in the character at the expense of all others. Some signs that this is happening: