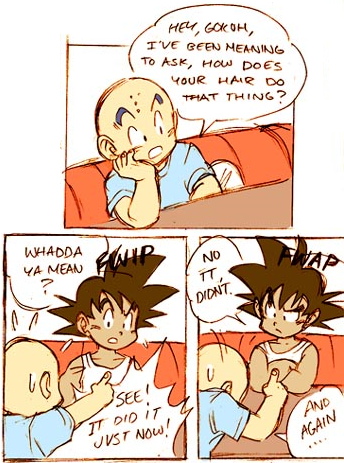 by AnnouncerGuy.
Gumball: Yeah, there's a lot of things you've never seen me do.
Darwin: You mean like how I've never seen you from profile?
Gumball: What do you mean?
Darwin: Well, like how you always hold your head at a three-quarter angle because you look weird otherwise.
— The Amazing World of Gumball, "The Ollie"
Advertisement:

In character art, especially animation, it's usually best to create a character with an identifiable feature. The problem comes in some cases when that feature might only be visible from certain angles, or might be reduced to something less than its full iconic status (or even misinterpreted as something else). Some might see this as being a Lazy Artist, and so overcompensate for the problem. For some characters, the usual rules of proportion and perspective are ignored, and that feature is drawn anyway. Commonly, characters with tails, horns, or ears might have those drawn even when they should be hidden by other parts of the head or body. This is known as a 'cheat'.

In Video Games and CGI animation, this trope is usually enforced with sprites. Sprites are two-dimensional images, so they have to always be facing the camera because they look paper-thin when viewed from any other angle. However, sometimes sprites are used in that fashion to make something look sharp, particularly in older games and ones which don't have much processing power.

In 2D overhead-view games, doors on most buildings always face south so that the player can easily see them, since there usually is no way to change the camera angle.

A subtrope of Distinctive Appearances. Unmoving Plaid is the subtrope of this for patterns that don't move with what they're attached to. Compare Cheeky Mouth, Ambidextrous Sprite, and Social Semicircle.

Of course, Tropes Are Tools; sometimes cheating angles is preferable — be it to keep that distinctive feature visible, or to avoid a distracting tangent line

(ie., when outlines appear to connect or overlap in a way that makes the composition or perspective of an image visually confusing) that would be caused by drawing it "correctly". In addition, this happens all the time even in live action. Visual storytelling requires reality to bend in order to tell the story with all the important information. Individuals will stand unusually close together so that no one is cut off by the frame, give enough room for the camera to follow them into a confined space and actors will stand on boxes so they don't disappear behind the tall people.

While the entirety of the Amazing World of Gumball is rendered in a 3/4 angle anyway, in true Gumball fashion, this trope ends up lampshaded when Darwin points out that Gumball always holds his head at a 3/4 angle.

While the entirety of the Amazing World of Gumball is rendered in a 3/4 angle anyway, in true Gumball fashion, this trope ends up lampshaded when Darwin points out that Gumball always holds his head at a 3/4 angle.