Giving Radio to the Romans 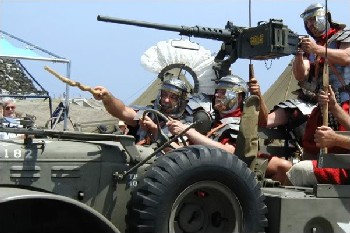 "Cross the river and go to Rome! Alea Iacta Est!" Hey, wait a minute. Something here does not seem right... note A-ha! That stenciling is using Arabic numbers, not Roman numerals!
Marina: You're not worried about changing the past and messing up the future?
Pearl: Nah. I'd only make good changes. Like giving cellphones to cavesquids.
— Splatoon 2
Advertisement:

The problem with the past is that it's so uncivilized, but any time traveler worth their salt can fix that. Just introduce it to the delights of modern technology, several centuries early. You may need to go through a few intermediate stages, replicating the history of technology on fast forward, but you know exactly what needs doing. How difficult can it be?

There are two types of time travelers who try this stunt - the unwilling ones, Trapped in the Past with just the right skills needed to jump start the industrial revolution, and the reckless ones who don't care about paradoxes, they just want to rewrite history for the better.

Either way, this is a long term plan. Even optimistic heroes will expect to take a few years to get the desired results. Realistic ones will consider it a lifetime's work. The hero can't leap straight to modern technology; they have to get the past society to go through all the intermediate steps first, or they won't have the necessary tools to make the tools to do the job. As such, this is typically the plot of an entire book, or even a series.

Ancient Astronauts and explorers rediscovering lost colonies occasionally fall into the trope, if the story goes into detail about how they introduce technological advances, but they normally gloss that over. By contrast, works in this subgenre typically go into great details about the new technologies being introduced to the past, and their social impact, as well as addressing all the problems that would realistically crop up.

If the stranded party has a phone to a high-tech society, whether in the future or on another world, this trope can still apply. The phone can provide them with all the information they need, but they still have to deal with the immense practical problems involved in getting from medieval to modern technology. It would still take decades to get 14th century England from church bells to digital clocks, even with an internet connection to the present day, and the full resources of the kingdom at your disposal. However, if the stranded party can get actual physical objects from their high-tech friends, the difficulties melt away, and this trope does not apply.

If the Hero went back in time with the purpose of using this trope to change history (such as preventing the Fall of Constantinople by going back to 1453 and giving the city's defenders modern weaponry and teaching them modern tactics), then it also counts as trying to Set Right What Once Went Wrong (or Make Wrong What Once Went Right, depending on the perspective).

Fridge Logic would dictate that this would result in an infinite technological loop: Suppose the radio was invented back in 50 B.C. by a time traveler. Since this means that time travel is possible, eventually somebody from the future of the timeline created by the original time traveler would travel back to an even earlier time (for example, 800 B.C.) and give radio to the Akkadians or something. Then a time traveler from that timeline would introduce radio even father back, repeating until the very first generation of humans ever to evolve is given advanced technology and civilization.

A group or community is transplanted.

After developing Time Travel and learning that the events of World War II would be the last true chance for him to assume control, Vandal Savage sends his 1940's self a Laptop from the 21st Century containing historical knowledge and schematics to build advanced weaponry to assume control over Nazi Germany.

After developing Time Travel and learning that the events of World War II would be the last true chance for him to assume control, Vandal Savage sends his 1940's self a Laptop from the 21st Century containing historical knowledge and schematics to build advanced weaponry to assume control over Nazi Germany.