Zeppelins from Another World 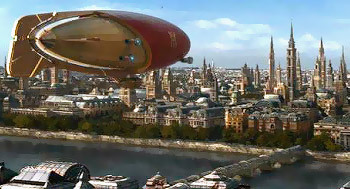 Oxford: the city of docking spires.
"A startling number of alternative histories wind up strengthening the marginal technology of airships and zeppelins, for example. This is a matter of flavor rather than logic, but this is a game book, after all."
— GURPS Infinite Worlds
Advertisement:

If your characters have entered a parallel universe that's just a few steps removed from our own, the fastest way to establish it is by sticking a whopping great Zeppelin airship in the sky.

In our world, Zeppelins seemed to be doing pretty well. People adored them; they were seen as extremely glamorous and futuristic. The world-famous LZ-127 Graf Zeppelin had accomplished global circumnavigations, arctic explorations, and aviation feats that people had only dreamed of. Then, on May 6, 1937, the flagship luxury liner Hindenburg burst into flames while landing in New Jersey for no obvious reason, the first major catastrophe caught on film.note The common theory as to what happened is that the captain's sharp turns trying to line up the Hindenburg with the landing mast cut a bracing wire which ripped open one of the hydrogen gas cells, causing a fuel leak, and a spark ignited the hydrogen as the mooring ropes were being dropped to the ground. This Hydrogen fire, which killed roughly a third of the passengers and crew on board, created a global panic. No commercial Zeppelin would fly again until 1999, though a few relatively tiny nonrigid "blimps" did continue to operate in small niches such as aerial videography.

More recently, airships are making a comeback for niches such as pleasure cruising, humanitarian aid, replacing helicopters for cargo hauling

, law enforcement, military surveillance, photography, and scientific research. This resurgence has been enabled by new technologies and designs that mitigate the airships' disadvantages and greatly enhance their lift, safety and speed—by hybridizing them with airplanes and tiltrotors.

It is important to note that the presence of airships doesn't imply that the technology of the Alternate Universe is inferior. Just like with biological evolution, Zeppelins are not "more" or "less" evolved technology, what's used is whatever is the best available fit for the niche. It could just as well be that Zeppelins in the Alternate History were better able to suit the situation than airplanes were, say if there was a massive resource shortage that demanded efficiency and payload over speed, some other economic factor, or simply because there wasn't a Hindenburg-Equivalent, Zeppelins never fell out of favor to begin with.

Strictly speaking, the name 'zeppelin' refers only to airships with a rigid internal frame, a propulsion and steering mechanism, (though it originally referred specifically to airships made by Luftschiffbau Zeppelin) and no anxiety that users will be put off by the name. Dirigibles and blimps still qualify for the trope. Alternate universe plane-spotters, take note.

So by filling up Earth 2 with bulbous aircraft rather than hovercars or spaceships, you are suggesting a world that is of a similar time period to our own, but just happened to follow a different technological route. It also helps that they have lots of Diesel Punk and Steampunk cred and are sufficiently olde-worlde to be used in fantasy stories too. They are also cool. In fact, when used in a fantasy setting, you're more likely to encounter a thriving airship industry than cars or trains which are clearly too mundane for such a setting no matter how useful.

Sometimes the Zeppelins are just there to show the audience that the movie is set in another world, even if nobody from our world crosses over into it and nobody in that world actually rides in one.

The transportation of choice for Sky Pirates everywhere. When zeppelins are only used by the villains, it's a Dread Zeppelin. Also see Airborne Aircraft Carrier, Cool Airship, and Floating Continent. Future Copter is a similar trope where ducted-fan VTOL aircraft are used to indicate a futuristic setting.