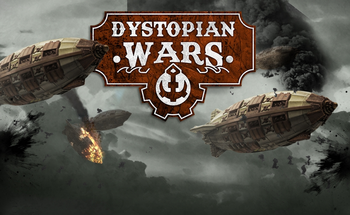 is a 8mm Tabletop Wargame, originally created by Spartan Games. It depicts an alternate World War between several major world powers - The Empire of the Blazing Sun, The Federated States of America, The Kingdom of Britannia, The Prussian Empire, The Covenant of Antarctica, The Republique of France, and The Russian Coalition.
Advertisement:

Currently, there are models available for all the powers listed above as well as for many lesser powers, such as among others the Ottoman Empire and the League of Italian States.

The first campaign book, Hurricane Season details the Empire of the Blazing Sun (With the Prussian Empire) campaign to take the Caribbean from the combined forces of the Federated States of America and the Kingdom of Britannia. Finally, the Covenant of Antarctica is planning to attack any other nation it encounters.

The second campaign book, Storm of Steel officially introduces the Russian Coalition and the Republique of France. It also introduces a multitude of smaller alliance nations: The Dominion of Canada, The Kingdom of Denmark, the Polish Lithuanian Commonwealth, and Prussian Scandinavia. Also included are the Belgians, entrenched in a civil war between the Protectorate of Belgium and the Belgian Royalists. This book details the Britannian campaign to establish a foothold in continental Europe by supporting the Belgian Royalists. The book also elaborates on the alliances introduced in Hurricane season. The alliances are as follows.

The Grand Coalition: The Kingdom of Britannia, The Russian Coalition, and the Federated States of America and their allies: the Dominion of Canada, the Polish Lithuanian Commonwealth, Belgian Royalists, and the Dominion of Royal Australia and New Zealand.

The Imperial Bond: The Empire of the Blazing Sun, the Prussian Empire, and the Republique of France and their allies: The Kingdom of Denmark, Prussian Scandinavia, the League of Italian State and the Chinese Federation.

The third campaign, Pacific Cyclone, introduces the League of Italian States, the Chinese Federation and the Australians (both Royal and Free Australia). This book details the attempt by the Grand Coalition spearheaded by the Federated States of America to capture the Blazing Sun held territory of Pearl Harbour.

It also has the sister 28mm game, Dystopian Legions about the ground forces.

With the closure of Spartan Games, the game became owned by Warcradle Studios. Part of the Dystopian Wars was retooled as Dystopian Age along with renaming the factions, integrating with the company's Wild West Exodus settings. However, the original name is still in use as of early 2019, when the third edition of its rulebook entered beta. Warcradle also produced Lost World Exodus, a 35 mm scale game with the ground forces of the great powers fighting over a transformed Antarctica.