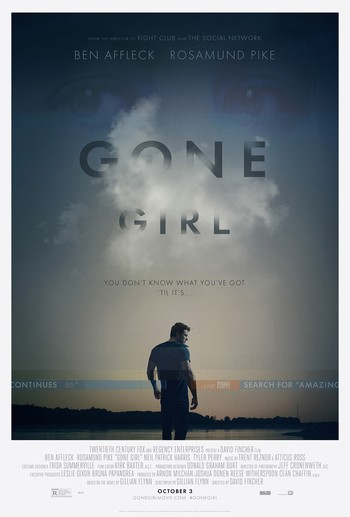 "When two people love each other and they can't make that work, that's the real tragedy."
"When I think of my wife, I always think of the back of her head. I picture cracking her lovely skull, unspooling her brain, trying to get answers. The primal questions of a marriage: What are you thinking? How are you feeling? What have we done to each other?"
— Nick Dunne
Advertisement:

Gone Girl is the 2014 film adaptation of Gillian Flynn's novel of the same name, directed by David Fincher and written by Flynn herself. It stars Ben Affleck and Rosamund Pike as Nick and Amy Dunne, respectively, as well as Neil Patrick Harris as Desi Collings and Tyler Perry as Tanner Bolt.

The film's story follows Amy and Nick Dunne (Pike and Affleck), whose seemingly happy marriage has culminated in the disappearance of Amy on the morning of their five-year anniversary. With the combined factors of an intense media feeding frenzy and persistent police officers, Nick's picturesque image begins to crumble, and the spotlight turns on him when suspicions arise that he may not be as innocent as he's letting on...

Please note that much of the suspense in the film's story comes from its numerous twists and turns. A majority of the tropes below are completely spoilered out, and thanks to Interface Spoiler, it's not even guaranteed that you won't figure out the twists just by reading what's below. With that said, read at your own risk.