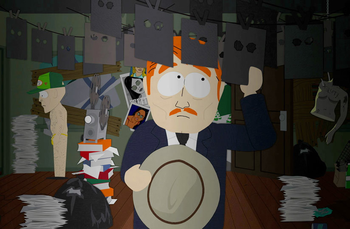 The Evidence Dungeon is the lair of the villain, which is full of all the things a good villain needs to do their work... and to be charged with said work when the police find it.

The defining feature of an Evidence Dungeon is the expositional stuff lying around that any sane person would hide or dispose of immediately. It's a place that is not only the villain's lair but is also where all the incriminating evidence is kept. This may make for a very foolish criminal, or just the right kind of delusional mind that would commit the crimes in the first place.

The Trope Namer is the eighth episode of the podcast The Flop House.

Differs from Chronic Evidence Retention Syndrome which can be more specific, for example, keeping a single incriminating note or weapon. Also not the same as a Room Full of Crazy which proves insanity but not necessarily guilt. For a Serial Killer, the place can be his Torture Cellar. The Big Board can be a non-insane version of Evidence Dungeon.

A Smug Snake or The Starscream might collect an Evidence Dungeon, too arrogant to believe that they would be caught. A Big Bad or Big Bad Wannabe has far-ranging plans with the correspondingly abundant evidence. Often it is the Serial Killer either collecting trophies of their work or too insane to realize all the clues just laying around. If the evidence is part of a creepy collection, you might be in The Doll Episode.

A detective/doctor/family member can stumble across Evidence Dungeons, shortly followed by some time Alone with the Psycho. Often this leads to an attempt on the discoverer's life by the owner of the room. These rooms can be also be susceptible to cases of vanishing evidence as well.