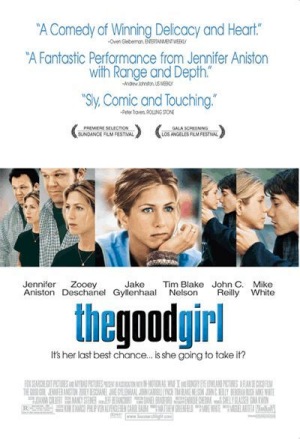 A 2002 black comedy-drama written by Mike White and directed by Miguel Arteta, The Good Girl explores trying to escape the mind-numbing dullness of everyday life, and the consequences of doing so.

Jennifer Aniston, who was trying to avoid being typecast due to her Friends success, stars as Justine Last, a depressed 30-year-old who lives in a dreary Texas town and works at the local "Retail Rodeo".

Married to the dim-witted Phil (John C. Reilly), and working alongside Gwen (Deborah Rush), the always cheerful older woman, Cheryl (Zooey Deschanel), who tosses obscenities into the announcements, and Corny (Mike White), the security guard who is always trying to get her to go to his bible study, Justine feels that her life is a prison, and she is "on death row".

She starts an affair with the oddball cashier, 22-year old Thomas "Holden" Worther (Jake Gyllenhaal), and slowly, her life begins to unravel.