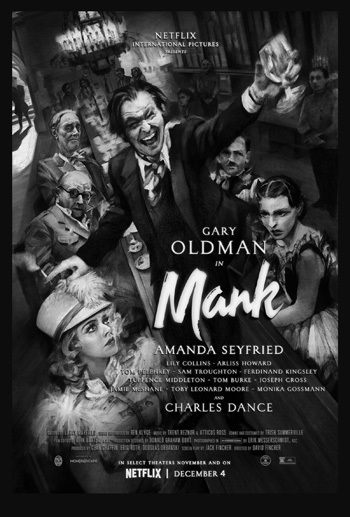 "Are you familiar with the parable of the Organ Grinder's Monkey?"
Advertisement:

Mank is a 2020 biopic film directed by David Fincher, written by his late father Jack Fincher.

It is a biopic of "humble screenwriter" Herman Mankiewicz, and it plays out in two narrative tracks. In one track, set in 1940, Mankiewicz (Gary Oldman) is taken out to an isolated ranch in Victorville, so he can dry out—Mank is a raging alcoholic—and get busy writing his latest script, for the movie that will become Citizen Kane. He scratches away at a screenplay while his secretary Rita (Lily Collins) tries to keep him sober and Orson Welles (Tom Burke) calls frequently from Los Angeles.

The other track follows Mank's earlier screenwriting career, 1930-37. He has left the New York literary world for the big money of Hollywood screenwriting, but he hates himself for it, even as the checks continue to roll in. Mank calls his brother Joseph L. Mankiewicz (Tom Pelphrey) out to Hollywood only to watch Joseph become more successful than he is. Mank works for MGM head Louis B. Mayer (Arliss Howard) while having no illusions about what a cynical liar Mayer is. Mank becomes a good friend of actress Marion Davies (Amanda Seyfried) and a frequent guest of Davies's lover/Meal Ticket, William Randolph Hearst (Charles Dance). Eventually Mankiewicz is unable to mask his contempt for both Hearst and Mayer, leading to a decisive break with both men—but his relationship with Davies and Hearst gives Mank an idea for a movie.