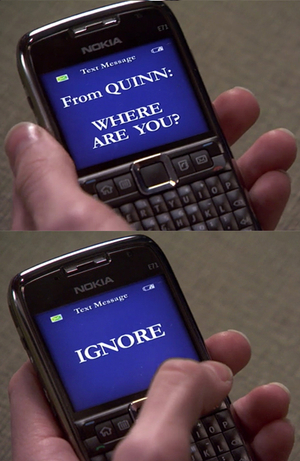 "How nice of my phone to tell me what button I literally just pressed. Wait, since when do phones have a button for ignoring a text message?!?"note On feature phones, pressing the hang-up key would ignore the message- a helpful function not available to almost all smartphones.
Casey: I'm installing 'Cinema-OS', the operating system used in the movies.
Andy: Any downsides?
Casey: Yeah, it can't show any font under 72 point.
— Casey and Andy #163

Any computer interface that is designed to be seen on television, as opposed to actually be useful for the user.

Often, a Viewer Friendly Interface is a frontend for an Omniscient Database, and often made of Beeping Computers with Magic Floppy Disk drives. For Science Fiction, however, Our Graphics Will Suck in the Future.

Can be Truth in Television, as programmers would like you to know that "Yes, the computer is working." In fact, computers have been around long enough that some glaring examples are actually Aluminum Christmas Trees.