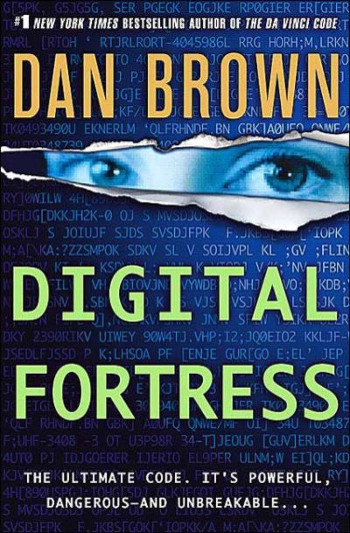 Digital Fortress is the first novel by Dan Brown, published in 1998.

Susan Fletcher, star of the NSA's cryptography division, is called in by NSA Deputy Director Trevor Strathmore after TRANSLTR, the NSA's code-breaking computer, encounters a code that it can't break. This code, called Digital Fortress, was created by Ensei Tankado, a disgruntled NSA operative. When Tankado is found dead in Seville, Spain, Strathmore dispatches David Becker, Fletcher's fiancé, to investigate in the hope of finding a clue to breaking the code, while Fletcher and Strathmore investigate Tankado's mysterious partner "North Dakota", who unknown to them is in talks with a Japanese corporation to release the Digital Fortress code publicly. But as in any Dan Brown novel, all is not as it seems...

As with any Dan Brown book, Digital Fortress is infamous for some lapses of research, particularly some glaring flaws in its portrayal of cryptography and its portrayal of Seville as a poorly equipped city, with a medical service almost as bad as some in third-world countries. Despite this, it remains a readable book if you keep the MST3K Mantra in mind (though opinions differ on this point).