Japan Takes Over the World 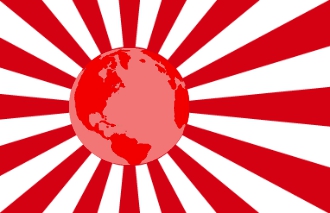 All together now: BANZAI!!!
"Pearl Harbor didn't work out so good, so we got you with tape decks."
— Mr. Takagi, Die Hard

In The '80s and the early '90s, Americans pretty much expected that Japan would be their new overlords in a decade or two. While other nations were too busy worrying about the Cold War and trying to dominate the world militarily, Japan was quietly taking over the business sector with a seemingly inhuman affinity for technology and a hive-like dedication to work. It seemed that, no matter what we did, we'd all soon wind up working for the Japanese.

As a result, a large number of media created in the 1980s and 1990s, set 20 Minutes into the Future or later, had the U.S. being dominated by Japanese companies and culture. This trope was particularly prominent in Cyberpunk of the era.

Since the Japanese economic crash

starting in the early 1990s, however, the trope has become discredited, as the Japanese aura of invulnerability became permanently cracked (see Analysis for more details). Today, the trope has been replaced in the Western world with a preoccupation over China taking over the world.

This is a Western trope. Compare Tokyo Is the Center of the Universe, which is a Japanese trope about Creator Provincialism.