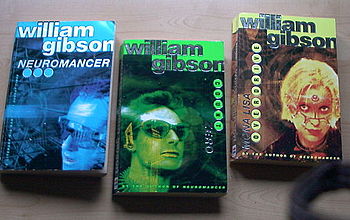 The Sprawl Trilogy by William Gibson is considered to be one of the earliest examples of cyberpunk, and as such is a major Trope Maker for the genre. The first book, Neuromancer, was published in 1984 and widely acclaimed, winning the Nebula, Hugo, and Philip K. Dick awards. It was followed in 1986 by Count Zero, and the final book in the trilogy, Mona Lisa Overdrive was published in 1988. All three have fallen victim to Zeerust and Technology Marches On to some degree, but remain quite readable thanks to more than a few of Gibson's ideas becoming reality, or at least a styled version of it.

Each book stands alone, more or less, though there is a distinct overlap in characters and all three share the same setting- the Sprawl. Which is the nickname for the Boston-Atlanta Metropolitan Axis, a massive city state on the East Coast of the United States. As is to be expected in 80s cyberpunk, the Sprawl (and, for that matter, Gibson's entire world) is decidedly dystopian in feel. They're set in a world of Black-and-Gray Morality, after the Soviet collapse, but were published in a time when that was considered quite revolutionary.

Set in the same world are the short stories "Burning Chrome", which introduced the recurring character "the Finn"; "Johnny Mnemonic", the inspiration for the movie of the same name; and "New Rose Hotel", which was also adapted into a film by Abel Ferrara starring Christopher Walken, Willem Dafoe and Asia Argento.

The trilogy provides examples of the following tropes: