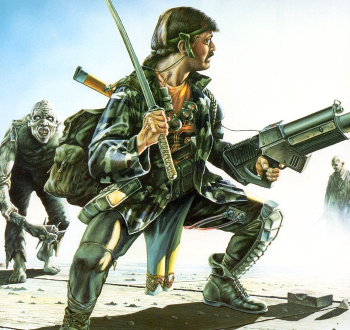 The Street Samurai is the classic protagonist archetype in Cyberpunk and Post Cyber Punk, but also shows up on occasion when those genres are mixed with Dungeon Punk and Urban Fantasy. Hackers, warriors, and anti-authoritarian loners, these characters fight against the dystopian governments and Mega Corps that rule their worlds. They are down-on-their-luck souls that Walk the Earth because their own personal codes of honor make them refuse to sell out to authority. Typical goals for this sort of character are Information Wants to Be Free and bringing down the very society in which they live in order to make a better one.

They are the tech-savvy mercenaries, bounty hunters, assassins, bodyguards and general badasses of the urban jungle. They're far cooler than standard Mooks, often sporting a Badass Longcoat, Cool Shades and other stylish gear. Edged weapons are common despite being strange for the era, and Katanas are recommended, but not mandatory. Street samurai by no means eschew firearms however, and are frequently expert gunslingers who use guns and swords together, but expect Cool Guns and Abnormal Ammo. In classic Cyberpunk, the samurai would often be heavily augmented with cybernetic parts, but this is no longer mandatory. Hacking, at least at a rudimentary level, or other similar tech skills (creating prosthetics, building custom weapons systems and vehicles etc.) is required.

Despite the name, these characters have a lot more in common with Rōnin and even more so with Ninja (see also Cyber Ninja) than they do with samurai, being essentially descendants of recognizable types drawn from hard-boiled private-eye literature and Film Noir.

Compare Samurai Cowboy, Corporate Samurai and Western Samurai. Note, that merely having the toys of a Street Samurai does not make you one if you don't have the personality and skill set. Not to be confused with the Steel Samurai.