Film / Ghost Dog: The Way of the Samurai 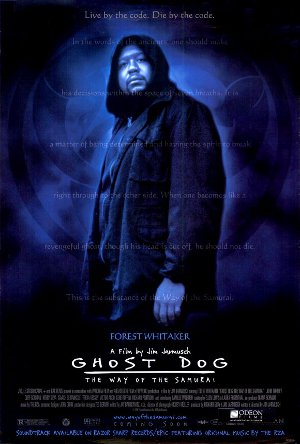 Live by the code, die by the code.
If one were to say in a word what the condition of being a samurai is, its basis lies first in seriously devoting one's body and soul to his master.
Advertisement:

An unusual mix of the samurai and gangster genres, Ghost Dog: The Way of the Samurai is a 1999 movie by independent filmmaker Jim Jarmusch, starring Forest Whitaker.

The story follows a hitman who calls himself Ghost Dog in the employ of The Mafia. Ghost Dog has a Foreign Culture Fetish for Japan in general and the samurai in particular, and strictly adheres to a samurai code derived from The Hagakure (a collection of quotations and musings from a famous samurai), and snippets from the book pop up during the movie.

Ghost Dog sees himself as a retainer (in the servant sense) of a local Mafia member named Louie, who saved Ghost Dog's life years ago. As a result, about a couple of times a year Ghost Dog performs totally untraceable assassinations on behalf of Louie and the mob family that Louie is a member of. But during the latest hit things get complicated, and the plot moves forward from there.

It's a quirky movie to say the least: Ghost Dog's habits and friend(s) are rather unusual, and the random happenings of Ghost Dog's life are interspersed with or interrupt the greater plot often. (This makes the film a character study of the protagonist as much as anything else).

The movie was a hit with fans of Wu-Tang Clan since Jarmusch, ordinarily a (white) B&W indie filmmaker, got the RZA to compose the soundtrack. (Years later he also did the Kill Bill soundtrack and the theme tune for both Afro Samurai installments.)

Its independent nature prevented it from receiving much attention, but it did receive fairly good praise from critics and has become a minor Cult Classic. Not to be confused with Cop Dog, a film about a ghost dog, who is also a cop.