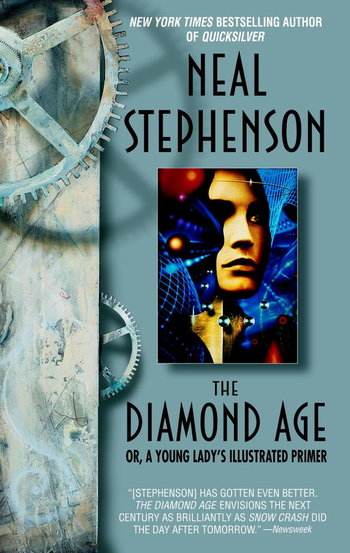 The Diamond Age, Or, A Young Lady's Illustrated Primer is a novel by Neal Stephenson about a world where nanotechnology has become ubiquitous and society has fractured along subcultural lines. Wait, no: it's about the role of human interaction in childrearing, as seen through the lens of an advanced educational simulation — something like an infinitely more sophisticated Oregon Trail game. No, that's not it either: it's about the influence of culture upon psychological development. Or is it about the breakdown of hierarchical social structures in the face of technological empowerment, or about that certain je ne sais quoi that separates souls from simulations?

Needless to say, it's got layers.

Nano-engineer John Percival Hackworth creates "The Young Ladies' Illustrated Primer", an interactive, educational storybook of incredible sophistication, for a high-ranking child of the neo-Victorian aristocracy he belongs to. Hackworth is also a father, however, and temptation on behalf of his own daughter eventually gets the better of him; his attempt to divert a copy sparks a series of crimes and misadventures that eventually place the book into the hands of Nell, an abused child in the neighboring slums of Shanghai. The remainder of the novel is largely a Coming-of-Age Story surrounding Nell's childhood and adolescence, both in the virtual world of the Primer and amid the unstable real-world network of competing subcultural "phyles"; many episodes from neo-Confucian justice, neo-Victorian high society, and Hackworth's increasingly strange career find their way into the labyrinthine plot as well. It's all bound to come to a head eventually... and it does, after some typically Stephensonian digressions into Turing completeness, packet-switched network routing, and the nature of artificial intelligence.