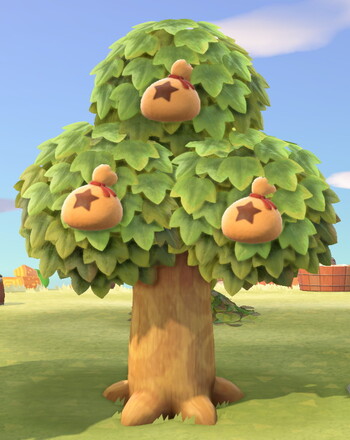 "I didn't know that words grew on trees," said Milo timidly. [...]
"Well, money doesn't grow on trees, does it?" demanded the count.
"I've heard not," said Milo.
"Then something must. Why not words?" exclaimed the undersecretary triumphantly.
—The Phantom Tollbooth
Advertisement:

A fantasy trope, mostly confined to children's fantasy, where trees don't just grow fruit, they grow anything you could want. Sometimes it's food, and sometimes it's something like shoes, or hammers, or whatever the author wants.

The idea of a money tree is also a great fantasy, even though you'd need a pretty big Artistic License in Economics to believe that buying things with such money is any more sustainable or ethical than counterfeiting.

Compare Level Ate, for more useful landscaping, and Solid Gold Poop for another money-for-nothing scenario as well as Body to Jewel for when it's not trees, but the (human) body which produces jewelry specifically. See also Mining for Cookies, for the subterranean equivalent of this trope.

If a plant is a potential source of anything you might want, but its parts still need to be processed before they're usable, it's a Multipurpose Monocultured Crop.