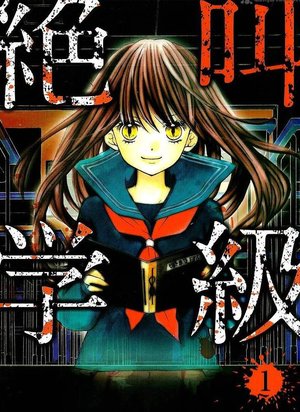 Zekkyou Gakkyuu (Screaming Lessons) is a Shoujo Horror Anthology created by Ishikawa Emi, which was serialized from 2008 to 2015.

All stories begin with a narration by a teke-teke, who is eventually revealed to be called Yomi, talking about an event that will become the focus of the current story. She also gives another narration at the end, mentioning the Aesop of the story and warning the reader that they could end up trapped in the same situation as the protagonist has just been in.

Despite the series being published in a magazine for preteens and older (Ribon), a large portion of the stories are surprisingly dark and terrifying. Cruel twists and terrible fates are the norm, though some stories became a bit more lighthearted over time.

was released in June 2013. It took elements of the two stories expanding on the background of Yomi to form an original story.