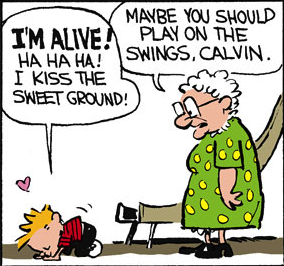 After a character has been lost at sea, on a near-deadly airplane flight, or perhaps just on a vacation gone wrong, they'll be so happy to have solid ground beneath their feet or be back home that they'll start to kiss the ground, no matter how filthy it may be. Sometimes for added humor they'll begin to spit and wipe their mouths in disgust afterwards.
Advertisement:

Not to be confused with Beach Kiss, though often times it's much more literal.