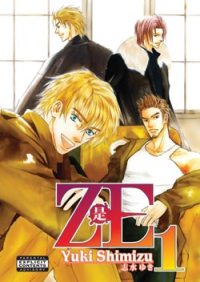 Since Raizou Shichikawa is left homeless and destitute after his grandmother dies, he accepts a job as a housekeeper at a Mitou mansion. He finds the family a bit weird, but things get more weird when one of the resident's arm gets severed and reattached without blood loss. That is because the Mitou family is composed of kotodama masters and kami. The kotodama masters wield a word-base power, and the kami-sama are human-like paper doll creations who heal their master's wounds caused by using kotodama.

The partnership between kami and kotodama-sama must be between between partners of the same sex to apperantly discourage them from having sex and falling in love, or something like that. But since this is a Boys' Love manga of course there's lots of yaoi sex and even some yuri sex.