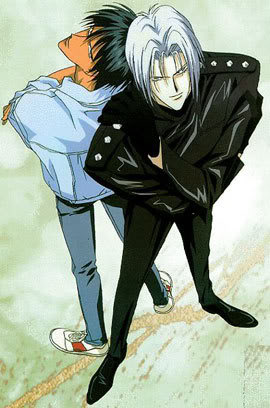 One of the great groundbreaking classics of the Boys' Love Genre, Zetsuai 1989 and its sequel series Bronze: Zetsuai since 1989 combine unique character designs and layouts with an emotionally intense storyline brimming with melodrama and always on the verge of breaking out into violence.

The story concerns Kouji Nanjo, a young Idol Singer with a dark and violent past and a Big, Screwed-Up Family, who is out drinking one night and falls down on the street. He's found and picked up by a highschool student and promising soccer star named Takuto Izumi, who takes him to his home to recover. When Kouji wakes up in bed with Izumi, he immediately recognises him as a person he saw playing soccer six years before and fell in love with — though at the time, he took Izumi for a tomboyish girl. Now that he knows Izumi is a boy, he finds to his dismay that his feelings have not changed and are still as strong as ever, but Izumi has a fiery temper and a trauma-laden past that makes it hard for him to trust anyone, and Kouji's all too aware that as a public figure he's not free to fall in love with whoever he wants.

Zetsuai 1989 ran in the Shoujo magazine Margaret and was collected in five volumes, with the plot reaching no conclusion to speak of; the sequel series Bronze: Zetsuai since 1989 ran in Margaret and later in the josei magazine Chorus, and then was collected in 14 volumes but broke off due to the mangaka's illness; she eventually gave the series a proper ending in a doujinshi. There were four associated light novels, and two single-episode OVAs, as well as a collection of associated music videos with the title Cathexis.