There Is Only One Bed 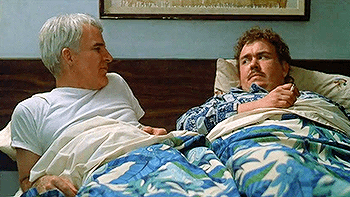 Jerry: Spent the night at James', did we?
Elaine: Yeah, but we reversed positions, so there was no funny business.
Jerry: Reversed positions?
Elaine: Yeah, you know, head to toe.
Jerry: So what? Your genitals are still lined up.
Elaine: No, because I slept with my back to him. (long pause)
— Seinfeld
Advertisement:

Two characters have to share a room for the night. Every room is occupied, but fortunately there is one last room available.

There's just one problem — there's only one bed, and the characters aren't comfortable sharing it.

A source of embarrassment, Unresolved Sexual Tension, or at the very least fuel for shippers everywhere, this is when two who aren't in a relationship (at the time) have to share a bed, for whatever reason.

It speaks to one's character if they insist on sleeping on the floor (or, in slightly more luxurious settings, the couch); often this will make the other upset that they then have to "owe" that person. It also speaks of their character if they demand the other person take the floor.

If one of the characters is a woman, then she will almost always end up with the bed, either because the woman forces the poor guy to sleep on the floor, or because the Nice Guy volunteers to do so.

A common complication is that one person goes to sleep on the floor or couch, but then ends up in the only bed anyway. Maybe they get a chill, or fall off the couch, or feel incredibly uncomfortable— but for whatever reason, despite being resolved not to share the bed, by morning they end up together anyway.

Shows up in far too many fanfics to attempt documentation. Usually played for shipping purposes, but can occasionally be used for comedic value.

See also Innocent Cohabitation, Sleep Cute. Contrast with Sleeping Single. If one of them Sleeps in the Nude, expect this trope to be Played for Laughs. See Exiled to the Couch for when married or romantic couples kick someone out as punishment, possibly for Blanket Tug O' War (which also affects non-romantic couples as well).

Not about limited art assets.

Applejack and Rarity argue over sharing a single bed.

Applejack and Rarity argue over sharing a single bed.