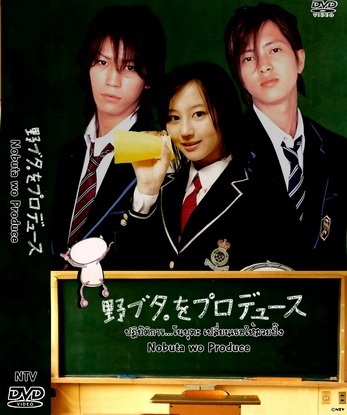 Nobuta wo Produce is a Japanese High School drama from 2005. It centers on Kiritani Shuji (played by Kamenashi Kazuya) and Kusano Akira (Yamashita Tomohisa) and their efforts in "producing" the new girl, Kotani "Nobuta" Nobuko (Horikita Maki) into a popular, well-liked girl...

And that alone might not be enough to get many people to watch it. However, it is not all as simple as that.

Shuji is a popular guy who seems to be "friends" with everyone, but is in fact only pretending to be Mr. Popular. Akira is a loud, strange, touchy-feely boy with a rich (and slightly hotheaded) father. He constantly follows Shuji around proclaiming to be his friend when they alone, which is the only time Shuji will ever break his facade and show his true self. In truth, he is afraid of losing his popularity and prefers thinking of school as a game.

One day, while he frantically looks for the willow tree he ritualistically touches every day before school (it had been removed earlier) Shuji stumbles across a dark, scary-looking girl who had wanted to hang herself on the branches of the missing tree, but didn't get the chance. He later sees her again at his school, and learns that she is a new transfer student, Kotani Nobuko

Unfortunately for Nobuko, she is horribly bullied by the girls in her class. Yet she does nothing to stop it, having experienced it all before. Shuji notices this, and privately decides that he does not agree with it. He enlists Akira to help "produce" her (like record companies produce normal-looking nobodies into idols). She reluctantly agrees to it after being attacked by her classmates and hosed-down with cold water in the girls bathroom. They decide to nickname her "Nobuta."

It was originally based on a book by Shiraiwa Gen, but differs greatly from the book in that Nobuta's gender and Shuji's personality were altered, as well as the inclusion of the fan-favourite character Akira. The series is widely loved by fans of J-dramas, and is often applauded for it's fantastic use of lighting, characterization, morals, plot, music and writing. It covers such themes as love, friendship, betrayal, trust, learning when not to give up and when it is a good idea to give in, and the possibility that people can change the way they interact with the world.