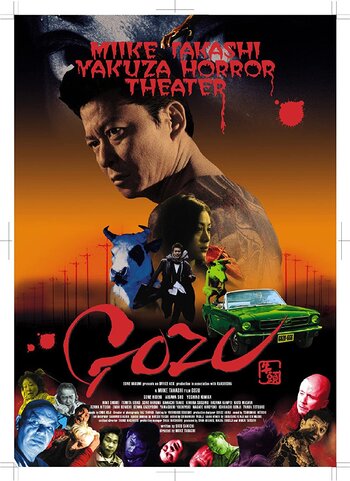 Gozu is probably the flat-out strangest, most mind-bending movie from Takashi Miike; a Japanese auteur who has made built his repuations on movies which are some combination of bizarre symbolism, Black Comedy, Darker and Edgier, and Gorn.

Starting ostensibly as yet another Yakuza movie, it takes a major turn into the surreal very soon into the story. Yakuza junior member Minami is ordered by the head of the gang to take his increasingly erratic and unstable senior member Ozaki out to a remote location, where he can be disposed of by an allied "cleaner". On the way, Ozaki dies mysteriously; and the story takes a turn for the decidedly surreal, when Ozaki's body disappears in a nearly-deserted, run-down suburb of Nagoya. Nothing appears to make much sense after that, either to the viewer or the protagonist. Minami endures a number of episodic, and confusing, adventures, and meets a cast of highly deranged characters — including a middle-aged woman who bottles and sells her breast milk; a huge, minotaur-like being wearing baggy underwear; several crossdressers who run the town's cafe; an unreliable guide with an odd skin condition; and a beautiful, enigmatic woman who claims to be his brother Ozaki.

At first, the entire film seems to be just a collection of random weirdness. However, it actually makes sense with the knowledge that nearly all the characters and events which take place after the arrival in Nagoya are based on events and figures from Greek and Japanese mythology; and that the entire story represents Minami's sexual awakening, and his coming to terms with both his homosexuality and his love for Ozaki.

It was originally planned as a straightforward action movie intended for the Direct to Video market (the Original Video market, as is called in Japan, does not have the same stigma of poor quality attached to it as it does in many other countries), but it Miike found the screenplay was far too ambitious for the budget. Rather than turning down the project, Miike decided to run with it. He asked Sato Sakichi to completely re-write it, and Sakichi did so in so short a time that he claims he was pretty much writing from his subconscious. After a successful screening at Cannes, it was released theatrically. The new script was produced in two weeks; and much of the dialog, particularly for pivotal scenes, is completely improvised.

Warning: Due to the nature of the story, the list below may contain spoilers.