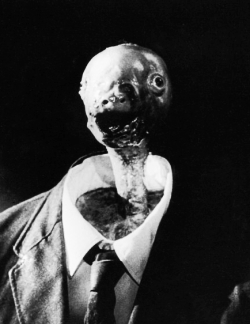 ... the hell?
"There's no earthly way of knowing... which direction we are going...
There's no knowing where we're rowing... or which way the river's flowing...
Is it raining, is it snowing?... Is a hurricane a-blowing?...
Not a speck of light is showing, so the danger must be growing.
Are the fires of hell a-glowing? Is the grisly reaper mowing?
YES! The danger must be growing, for the rowers keep on rowing,
AND THEY'RE CERTAINLY NOT SHOWING... ANY SIGNS THAT THEY ARE SLOWING!"
— Willy Wonka, Willy Wonka & the Chocolate Factory

As much as they might scare some people, at least monsters, serial killers, and Primal Fears are scary in a comprehensible way.

This is where Surreal Horror comes in. It's not just nightmare-inducing; it's nightmarish in a literal way, by being surreal, disjointed, dreamlike, and filled with bizarre imagery, usually saying goodbye to all logic and sanity in the process. In some cases, though, it might not always work.

This is likely the main reason clowns can be scary, along with other creatures of the Uncanny Valley.

It's worth noting that not all Surreal Horror works may be considered "horror" in the genre sense, but they're horrifying all the same.