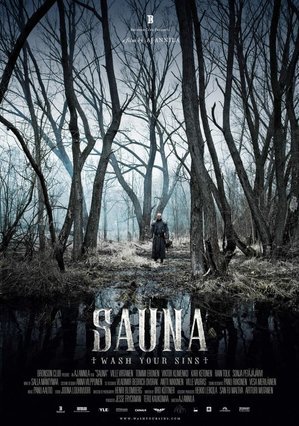 The second feature-length film by the Finnish director AJ Annila, Sauna, premiered in 2008, is a piece of Surreal Horror that delves into the darkness of the human heart.

The year is 1595, and the 25-year war between the Kingdom of Sweden and the Russian Empire is finally over. A new border is drawn through the contested area of Finland by an expedition consisting of agents of both Crowns. From the side of Sweden there are two brothers, Erik and Knut Spore, ethnic Finns who both seek recognition in their own way. Erik is an aging soldier who seeks to earn land for his family, while Knut is an enterprising scholar seeking a tenure in the University of Stockholm, intending to present a map of the previously unmapped Finnish lands as proof of his skills.

On their way, the brothers murder a peasant man in a fit of rage, and leave his daughter to die, locked in a cellar. As they keep going, visions and fits of guilt haunt them, as they debate whether they should return to let the girl out. It is then they come across an unmarked village in the middle of a swamp, with a mysterious sauna standing on its edge. The superstitious villagers are mortally afraid of the place, but at the same time hold a belief that in this sauna a person can wash away their past sins for good. The sauna beckons the brothers to step inside, but is the person who steps in the same who comes out?