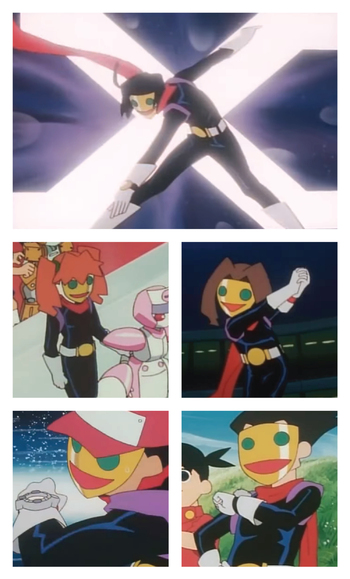 I Am Spartacus — as a lifestyle. The inverse of the classical Secret Identity. Rather than one character with multiple identities, sometimes authors will flip this around and have multiple people with one identity.

Twin Switch is a variation on this trope. A Sister Trope to Together We Are X. Contrast Secret Identity and Two Aliases, One Character. Legacy Character is a more specific related trope, where the identity is passed on from person to person. Identity Impersonator is when a second person temporarily adopts the identity in order to have Secret Identity and Public Identity appear together. See also Amalgamated Individual, where multiple deeds are ascribed to a single person. Not to be confused with The Dividual, where the multiple characters having one identity is more permanent and treated as an idiosyncrasy rather than a plot point. Also loosely related to Dead Person Impersonation.

Given the nature of this trope, spoilers abound in the examples below.