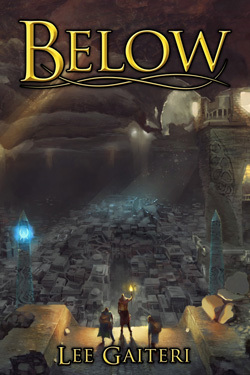 Below is a fantasy adventure novel by Lee Gaiteri.

A master forger's wife asks young highwayman Brenish to sell a fake map to the late wizard Visak's famous treasure. Fascinated with tales of the underground ruins of the Elder Kingdom where the treasure is kept, Brenish already has a reputation as a lore master—but he's an even better liar. Unfortunately his boss Gareth St. James is every bit as obsessed with the ruins, and once he learns of the map Brenish is forced to bluff that it could be real.

Gareth mounts an expedition and brings along six of his henchmen, four thieves including Brenish who owe him money, and a hostage to use against Brenish for good measure. The two men need their combined wits to survive in the ruins, but Brenish knows that the quest is doomed to fail. Somehow he has to find another way to satisfy Gareth, or he and his friends are just as doomed.

Not related to the 2018 Roguelike BELOW. Or to the 2002 Psychological Horror film.

Below contains examples of: