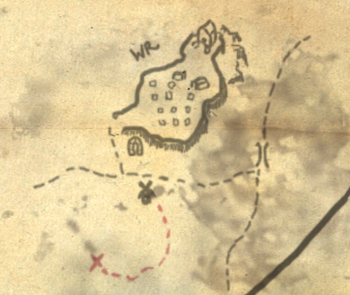 "We got us a map
That leads us to a hidden box
That's all locked up with locks
And buried deep away
We'll dig up the box
We know it's full of precious booty
Burst open the locks
And then we'll say 'Hurray'"!
— LazyTown, "You Are A Pirate

Follow the map, dig up the treasure, get rich — A Simple Plan which seldom works.

First, the heroes have to find the map. If they're lucky, someone will conveniently drop dead at their feet with the map on them; if they're less lucky it will have been hidden in some old heirloom. If they're really unlucky, it'll have been cut up into pieces, each held by a different group of treasure hunters; the heroes will have to collect all the pieces before they can even start looking for the treasure.

Next, they'll need to find the starting point, the right tropical isle or hidden cave. Getting there may be an adventure in itself. Once there, the heroes have to find the actual location of the treasure. This can be as simple as "X" Marks the Spot", or "fifteen paces south of the dead pine" (though might find that fifteen paces for one of their group doesn't cover the same distance for another, and there's always the possibility that the landmark is no longer around - trees fall down or catch fire, rivers change course, rocks roll to a new position, etc) up to having to navigate a Bamboo Technology Death Course, with only cryptic comments scrawled on the map to help them find the safe route through. If Status Quo Is God either the treasure will turn out to be worthless or the heroes will have to abandon it for the greater good.

Expect at least one group of antagonists to be on the heroes' heels throughout all this.

The treasure can range from criminal loot and pirate gold to ancient temples and powerful MacGuffins. The heroes will never think about handing it over to the authorities.

The Adventurer Archaeologist will often come across treasure maps. This trope is also a form of A MacGuffin Full of Money. This trope is often associated with Pirate Booty, despite the fact that pirates rarely buried treasure - the typical pirate would spend most of his income from a voyage outfitting the ship for the next one, and squander the rest on high living before setting out on said voyage (Given that piracy is a rather high-risk career, there's a pretty good chance that a pirate who cached his loot with the intent to spend it some years later wouldn't be alive at the time he planned to dig it up. As the pirates were smart enough to know this, they spent most of their loot at the first opportunity they got).

If it turns out that the map isn't real, it's a Fool's Map. In a series that doesn't usually feature this plot, see the Sub-Trope Treasure Hunt Episode, or otherwise Pirate Episode.

When Donkey Kong finds a treasure map, all of Kongo Bongo gets swept up in the hunt. DK wants a present for Candy, Candy wants to buy the Barrel Factory, and K.Rool thinks the treasure is doomsday device that will help him conquer the island!

When Donkey Kong finds a treasure map, all of Kongo Bongo gets swept up in the hunt. DK wants a present for Candy, Candy wants to buy the Barrel Factory, and K.Rool thinks the treasure is doomsday device that will help him conquer the island!