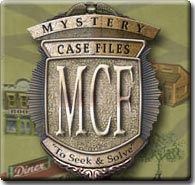 You be the detective.
Mystery Case Files is a series of Casual Video Games from Big Fish Studios, Elephant Games, Eipix Entertainment and Grandma Studios. Despite its title and slogan, no actual sleuthing occurs; it's actually a Hidden Object Game, a genre which became popular with this series.
Advertisement:

There are currently twenty-three main games in the series for home computer:

As well as three spin-offs:

They can be downloaded at the "Official Fan Site

" (isn't that an oxymoron?) or the Big Fish Games site

In 2013, Big Fish has also announced a free-to-play spinoff game, Spirits of Blackpool. The app release is for iOS in the Canadian App Store.

The Ravenhearst story arc subseries is arguably the most famous line of titles to come from the Big Fish developers. Although not all of the plots in the arc are directly related to the events at Ravenhearst Manor, you play the same Master Detective in all of them and there is a tangential connection in each one.