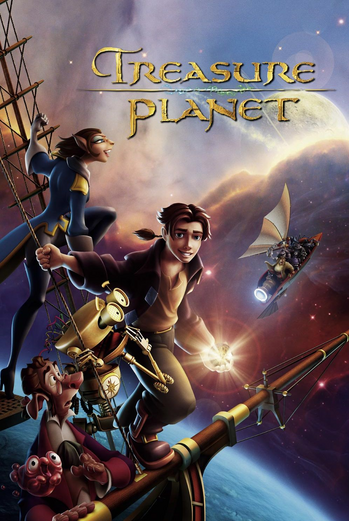 "The loot of a thousand worlds."
There were nights when the winds of the Etherium, so inviting in their promise of flight and freedom, made one's spirit soar.
Advertisement:

Young Jim Hawkins is a troubled teenager living in a Space Opera universe of Space Whales, Wooden Ships and Iron Men. The son of a single mother who runs a run-down hotel for space-travelers, Jim is trying—and failing—to cope with the fact that his father abandoned the family years before. And then, one fateful day, a mortally wounded alien crash-lands outside the old hotel, and delivers a mysterious MacGuffin into Jim's hands with three dying words: "Beware the cyborg!..."

Thus begins Jim's quest - a search for the treasure of fabled Space Pirate Captain Flint, the loot of a thousand worlds. Chaperoned by the absent-minded Dr. Delbert Doppler, he joins the crew of the Legacy—including the catlike Captain Amelia, the sturdy (indeed, stony) Mr. Arrow, the menacing scorpion-like Scroop, the paternal cyborg space-cook John Silver, and the latter's Empathy Pet, a little blob named Morph—on a voyage that will make them all rich...

The film received a video game adaptation, as well as a sequel game called Treasure Planet: Battle at Procyon, featuring an Older and Wiser Jim rising through the ranks of the Imperial Navy.