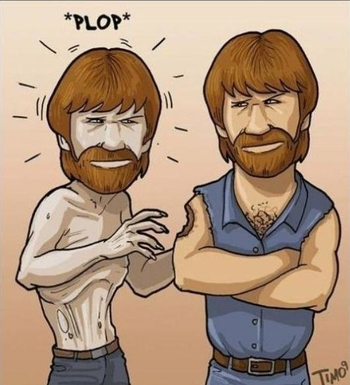 When Chuck Norris is bitten by a zombie, he doesn't turn into a zombie. The zombie turns into Chuck Norris, naturally.
"Hey, Doctor Luce — this proteus nanovirus — isn't it supposed to, you know, go out of control infecting and transforming everyone, and like that?"
"Of course not. Not unless you design it to. Here's how."
— GURPS: Bio-Tech
Advertisement:

There are forces, be they biological, mystical or technological, that can infect and change a person into something... else. These tend to be highly contagious, spreading easily via physical contact, bite, ritual, or other means. The changes are seldom subtle, and often quite a shock for the victim, who will likely wonder what they have become. On the plus side, the Viral Transformation is usually Cursed with Awesome, giving the "victim" Stock Superpower and the ability to give them to others.

By now you're probably wondering what the downside is to this, and why this "disease" hasn't been shared among all of humanity. Well, it's usually because it makes the transformees jerks. While it's not (always) The Virus, making those infected into Always Chaotic Evil, Mind Controlled servants to a Hive Queen who gladly eats puppies, it does lend itself to "Power Corrupts". Though the changes are mostly physical, the alterations may cause a change in perception because The Mind Is a Plaything of the Body, their new body has a Horror Hunger only sated by eating orphans (and it tastes good!), and With Great Power Comes Great Insanity.

Those responsible for infecting the victim may expect a Face–Heel Turn because the shock at the change will make them run to others like them, as well as Fantastic Racism making it likely they'll be alienated by their friends and family (this is especially likely if the transformation is less than cosmetically appealing). However; the choice to do so remains with the victim: they can consciously choose Transhuman Treachery, to stand apart and above of humanity, become Fully Embraced Fiends who enjoy their condition, to be Friendly Neighborhood Vampires and live among if not entirely in harmony with humanity, or even be a Pro-Human Transhuman and act the Sheep in Wolf's Clothing while becoming a Vampire Hunter.

Common examples of this include most forms of Lycanthropy and some forms of Vampirism. Expect those affected by a Viral Transformation to be tempted to help friends or loved ones with an Emergency Transformation or surprised when a blood donation turns into a Superhuman Transfusion. See also Virus Victim Symptoms.

See also Warm Bloodbags Are Everywhere. Compare The Corruption. Contrast with Transferred Transformation, where the recipient gets a transformation while the donor loses it, and Physical Attribute Swap, where two characters trade specific physical traits rather than proliferate them. A type of Face–Monster Turn.