Mulder and Scully Meet the Were-Monster 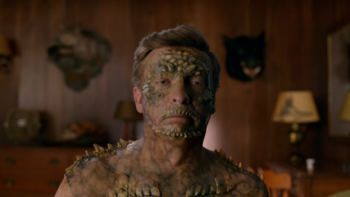 Who is the monster and who is the man? We'll leave it to you to guess.
Written and directed by Darin Morgan
"Perhaps I've read you wrong, Mr. Mulder, but I wonder: who is in more need of an antipsychotic, a man who believes himself to be a were-lizard or a man who believes that man?"
— Dr. Rumanovitch

As one can read from the title, this is where Mulder and Scully meet the were-monster.