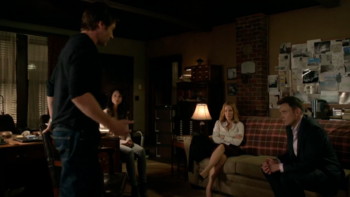 "For better or worse, we've... moved on with our lives."
Written and directed by Chris Carter
Mulder: I saw an ARV, running on free energy. I saw it disappear.
Old doctor: That's what they all seem to do.
Mulder: But the technology exists. It's existed since Roswell. And it's been in use, being used on humans in human testing, the taking of men, women and children that's misreported as alien abductions.

Nearly fourteen years after the X-Files were shut down, a Conspiracy Theorist talk show host reunites Mulder and Scully to help him investigate apparent alien abductions.

Mulder: Scully, are you ready for this?
Scully: I don't know there's a choice.