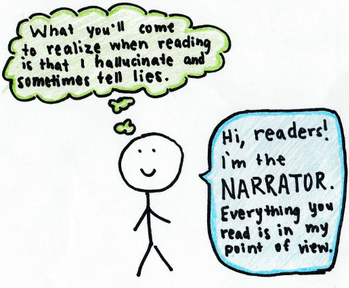 "You just show that your first-person narrator was actually in an insane asylum and then OH MY GOD, did it actually happen? Who can say? Here, I can say. It didn't happen because your narrator was just no good. Listen. Never lend an unreliable narrator money."
— Dinosaur Comics, "Literary techniques comics: Unreliable Narrator"

In most narratives, there's an element of trust that the person telling you the story is telling the truth, at least as far as they know it. This trope occurs when that convention is discarded. The narrator's facts contradict each other. If you ask them to go back a bit and retell it, the events come out a little differently. It can be like dealing with a used-car salesman — there's a real story in there somewhere, but you're left to piece it together through all the lies, half-truths, and mistruths.

Reasons for the unreliability vary. Sometimes the narrator is a guilty party and is trying to mislead the audience as well as the other characters. If the narrator is insane, it's Through the Eyes of Madness. A consistent and sincere testimony may prove Unreliable if coming from a perspective of personal bias, or conclusions drawn from incomplete observation. If the narrator has honestly misunderstood what's going on due to naivete, inexperience, or just lack of information, it's Innocent Inaccurate. A variation commonly seen in kids' books is that the narrator is a small child and is actually playing make-believe, but claims their "adventures" are real.

As an author, this is a difficult trick to pull off. It is a lot easier to tell a straight story than it is to deliberately mislead the audience, never mind that it violates the traditional assumption that Viewers Are Morons. And there's always a risk of attracting Misaimed Fandom.

One common technique is to use a Framing Device, so that the narrator is presented as a character in the frame story, to emphasize that s/he is not actually the author. Another, even trickier method, is the Direct Line to the Author, where the narrator is supposedly relating things that happened in Real Life, or Literary Agent Hypothesis, for when fans speculate that such a thing is occurring. Multiple unreliable narrators results in "Rashomon"-Style. If it's a visual medium and the picture contradicts the narration, it's an Unreliable Voiceover. This can also be used as a trick in commercials, to evade claims of false advertising by having an unreliable character do the talking. Sometimes, the story might be illustrated so that the narrator lies but the illustrations tell the truth.

First-person stories and third-person-limited stories are candidates for two levels of the Unreliable Narrator. First, a well-written story would have the Innocent Inaccurate version, simply because the narrator shouldn't provide any information that the viewpoint character doesn't have, and in a more-difficult version, may not be able to provide information he has because the character hasn't the vocabulary or the necessary background knowledge. Second, the narrator sometimes refuses to tell us what the viewpoint character knows or sees at a critical junction.

In video games and other interactive works, an unreliable narrator can maintain immersion while dismissing the character losing numerous Video-Game Lives as poor memory or wandering thoughts, or even while drawing attention to uncharacteristic actions or exhaustion of options. This does require more effort on the designers to identify potential plot branches and the consequences of all of the player's possible input at every critical moment.

Unreliable Expositor is a variant with less than credible exposition from specific characters, as opposed to narrators of the whole story. Contrast Maybe Magic, Maybe Mundane where the evidence is reliable but insufficient, and Infallible Narrator, when the narration of the character is far more accurate than the character's capabilities. A Lemony Narrator is usually reliable as far as the facts go, but probably eccentric or opinionated in other ways.

This can also be a source of humour for the work, too.

Note that this is specifically for narrators within the work. When it's the author that's lying, that's Lying Creator. When the author simply can't make up his mind, that's Flip-Flop of God.

Note: as this is often a particularly subversive Reveal, REALLY BIG spoilers ahead, especially in the Literature section. See also "Rashomon"-Style, Unreliable Voiceover, and Self-Serving Memory. Fanon tropes like Alternative Character Interpretation result from the fandom treating the narrator as unreliable by default. On the other hand, the narrator may end up being seen as unreliable due to breaking the audience's Willing Suspension of Disbelief, thus leading to tropes like Unintentionally Sympathetic and its converse.

When Homer relates the story of Maggie's birth, Bart hijacks the story and causes Homer's head to inflate and burst like a balloon. Homer takes over and has to be corrected about his missing head and gut size.

Example of:
Your Head A-Splode

When Homer relates the story of Maggie's birth, Bart hijacks the story and causes Homer's head to inflate and burst like a balloon. Homer takes over and has to be corrected about his missing head and gut size.