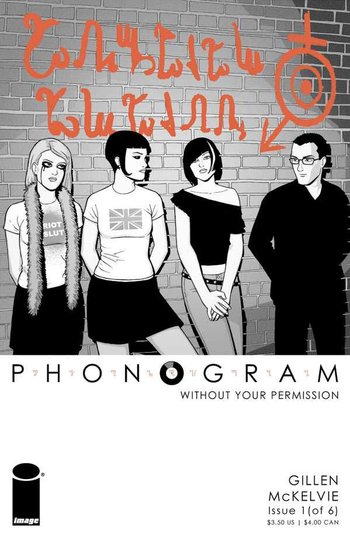 "Has a song ever changed your life?
Did you ever wonder how?"
Advertisement:

Phonogram is a series of comic book miniseries by Kieron Gillen and Jamie McKelvie that takes Magic Music into the 21st century. In this universe, pop songs have power and the people who can use it are known as "phonomancers". The first miniseries, Rue Britannia, serialised in 2006-7, follows phonomancer David Kohl's attempts to discover who is trying to resurrect the dead goddess of Britpop. The second series, The Singles Club, serialised in 2008-10, takes place over one evening in a club, each issue viewing the events through the perspective of a different character. Gillen and McKelvie then announced a third series, The Immaterial Girl, which follows the character Emily Aster; thanks to both creators' work for Marvel Comics, it spent several years in Development Hell, but was finally published starting in August 2015. A collection of the entire series has been released.

Each issue is so jam-packed with references to bands and music that a 'crib sheet' is included in the back. This is often one of the most entertaining bits of the comic, as its tone is very personal and informal.