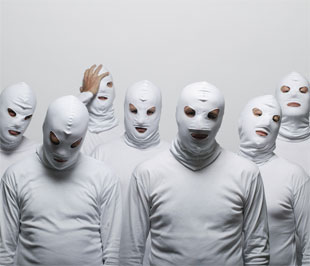 TISM (short for This Is Serious Mum) were a seven-piece anonymous Australian alternative rock/electronic band known for their satirical lyrics, energetic live shows and frequent piss-taking. Formed in 1982 in south-east Melbourne, they immediately broke up after a disastrous first gig (with every subsequent gig termed a "re-union gig"), before getting back together and releasing their 1988 debut album Great Truckin' Songs Of The Renaissance to mild success. In 1995, with the release of their third album Machiavelli And The Four Seasons, they departed from the simple rock sound of earlier albums into a more synth-orientated electronic style. The change was a hit, and the album became their best-selling and most famous. They broke up in 2004 after releasing The White Albun, (sic) their sixth and final album.

Taking inspiration from The Residents, TISM were never seen without their trademark balaclavas and often sported elaborate costumes at concerts. The band used their anonymity to become the premier trolls of the Australian music scene, known for pranks on both the media and audiences alike (for example, turning up on Hey Hey It's Saturday with 28 band members

, and playing a gig that lasted a whole 3 minutes

). Naturally they courted a lot of controversy, most famously earning the ire of Australian-born Flea for a song about the death of River Phoenix, and getting sued by artist Ken Done for an album cover parodying his artwork.

While relatively popular in Australia, TISM are probably best known internationally for their 2004 single "Everyone Else Has Had More Sex Than Me", due to the music video of a lamenting bunny

becoming an early viral video on flash sites such as Newgrounds and Albino Blacksheep.

Now here we are at the last verse... I've lost interest.