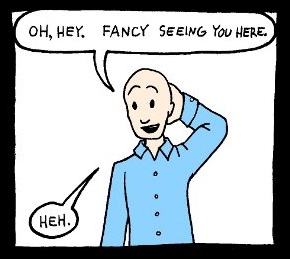 Hey, he did shave his beard!

Mason Williams, a.k.a. Tailsteak, is a Canadian Webcomic author best known for 1/0, an intensely metafictional story of creation, improvisational physics, philosophy, character development, and a Running Gag. Since the completion of that comic, he began publishing several other comics serialized on his personal website—these have been mostly placed on hold with the start of Leftover Soup. He is also an author of straight fiction, including a short novel titled bang: an apocalypse,

and of at least two role-playing systems.

He is married to Amber M. Williams née Panyko, the artist behind Dan and Mab's Furry Adventures.