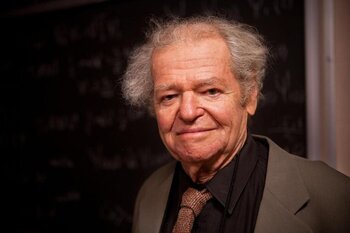 Aron Tager (June 30, 1934 – February 28, 2019) was an American-Canadian actor, poet, artist and sculptor. He was born in Brooklyn, New York, but is later became a resident of Toronto, Ontario, where he became prominent name in television, advertising, animation, and theater.

Outside of acting, he was also a successful visual artist. Many of his sculptures and paintings have been exhibited and displayed at museums and installed at schools and community centers. He won numerous accolades for his work in this area.

He was married to actress Anne Page until he passed away at the age of 84 in 2019.

, where you can see a lot of his artwork.